The Household Cavalry Museum is a living Museum in the heart of Horse Guards, Whitehall, London.

It celebrates the history & accomplishments of The Household Cavalry offering a unique 'behind the scenes' look at the work that goes into the ceremonial & armoured reconnaissance role of HM The Queen's Mounted Bodyguard.

Key features of the museum

in our uniforms: tunic, cuirass (a piece of armour consisting of breastplate & backplate fastened together) & helmet. See if you’ve got the mettle to protect the Monarch at home & abroad.

SEE THE REGIMENT IN ACTION;

PEEK INTO THE WORKING STABLES;

to see what it takes to care for our many beautiful horses.

FUN FOR THE WHOLE FAMILY;

can be arranged in advance for groups up to 20. Larger groups can be accommodated but are split into two.

The museum celebrates the dual roles of the Queen’s mounted bodyguard, & is a window into the heart of this regiment based in the epicentre of historic London.

Ceremonially, the regiment has protects not only the entrance to the Royal Residences on Whitehall, but operationally has been at the forefront of every major battle since its genesis in 1661.

Members from across the Commonwealth dedicate their lives to the protection of the monarch & the realm, & in turn the museum celebrates their lives & achievements as well as the ones they protect.

The public are invited to enjoy a unique glimpse into a modern working environment, set in the 18th century stables of a site the regiment have guarded for 350 years.

Uniform is a big part of who we are & identifies us to each other. The best way to learn about our uniforms is to try them on- so don’t forget your camera! Tag us in your social media feed for a chance to win a free return visit & entry into our competitions.

Find the hidden messages on the helmet & learn what difference a white or red plume makes. Why do we wear them & what are they made of?

Who wears red & who wears blue? What does the braiding mean?

What’s the hidden secret behind this shiny armour? Why is it an hour to wear one & how could the straps save your neck?

These boots aren’t made for walking; why are they the shape they are & what makes them so strong? 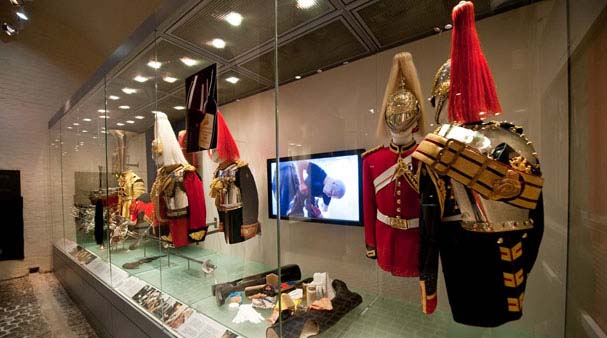 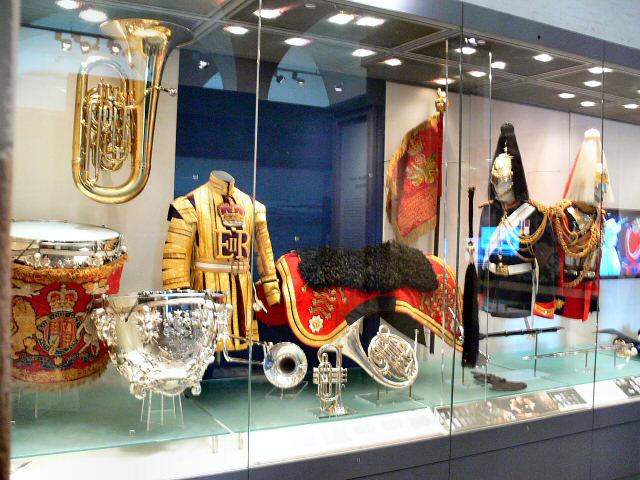 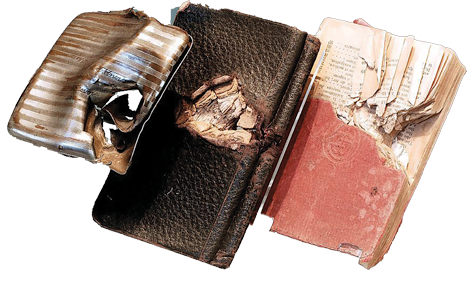 With one of the finest collections of regimental silver split between Knightsbridge & Windsor, see the ‘crown jewels’ of the collection here at Whitehall- including our William III drums & the Zetland Trophy.

With beautiful selection of gifts, souvenirs & regimental pieces & do let us know if you’d like to pop in & see more or speak to us on the phone about anything.

The museum will be closed on the following days: Tuesday 24th July from 12pm due to military security

Group discounts available - 10% discount on groups of 8 or more.

The Changing of the Queen’s Life Guard takes place daily on Horse Guards Parade at 11am (10am Sundays). The Daily Inspection takes place at 4pm (Front Yard Whitehall).

We are committed to ensuring the Household Cavalry Museum is accessible to all visitors. If you have any queries or need any assistance, please ask.

Combine a visit to the Museum with any of the following attractions close by.

The Banqueting House is directly opposite Horse Guards.

More about the Household Cavalry

'TRUSTED GUARDIANS OF THE MONARCH'

Role of the regiment;

The Household Cavalry are Cavalry Regiments who along , with the five Foot Guards Regiments, form the Household Division.

Formed in 1661 under the direct order of King Charles II the Household Cavalry today consists of the two senior regiments of the British Army, The Life Guards & the Blues and Royals who have two roles:

The operational role, of the The Household Cavalry Regiment, is in armoured fighting vehicles & they have been involved in Britain's military operations including the Falklands, the Gulf, Bosnia, Kosovo & most recently in Iraq & Afghanistan.

The Household Cavalry Mounted Regiment, equipped with horses, consists of a Squadron of The Life Guards, & a Squadron of The Blues and Royals who provide 'The Queen's Life Guard' and carry out ceremonial duties, including the provision of the Sovereign's Escort for State & Royal occasions.

The Household Cavalry has also earned a formidable reputation on the battlefield, having served in iconic conflicts from Waterloo to Afghanistan. At home, its duties have ranged from providing security for the 2012 Olympic Games in London to assisting flood victims.

Whether they’re riding a horse or driving an armoured vehicle, all Household Cavalry soldiers have one thing in common: excellence.

The reigning monarch normally holds the appointment of Colonel-in-Chief of the regiments of Household Division. Each regiment has a Colonel who is normally either a member of the Royal Family or a senior officer.

The Household Cavalry is one of the oldest regiments in the British Army, with roots dating back to 1660. Up until the beginning of World War II, it acted as a heavy cavalry unit. Today, it functions as an armoured reconnaissance regiment, as well as carrying out its ceremonial duties.

1660 - The Life Guards formed to escort & guard the monarch.

1982 - The Blues and Royals support 2 Para at the Battle of Wireless Ridge, Falkland Islands.

The Household Cavalry has a longstanding reputation as an elite battlefield reconnaissance force. Its soldiers also act in a ceremonial capacity as the public face of the British Army, & as mounted escort to Her Majesty The Queen.

Queen Elizabeth II posing for a photograph with soldiers from the Household Cavalry, at Combermere Barracks
Official Guidebook

The Life Guards, although not the oldest, is the most senior regiment of the British Army

They were formed by Prince Charles, later King Charles II, when he was exiled at the end of the civil war from loyal followers who traveled with him to Holland.

Since their first action in the Battle of Maastricht in 1672 the Life Guards have won numerous battle honours, including Waterloo, Marne, Brussels & El Alamein.

During inclement weather they sometimes wear a long red cloak with a blue collar.

The Blues And Royals;

They are the only regiment in the British Army officially known by their nickname, 'The Blues and Royals, Instead of being known as the Royal Horse Guards and 1st Dragoons.

Their battle honours stretch back to Tangiers 1662-1680 & include the Battle of Waterloo where they captured the Napoleonic Eagle of the French 105th Infantry Regiment.

The Blues and Royals wear blue tunics & metal helmets with red plumes. Except for the Trumpeters who ride greys, they ride black horses .

During poor weather they may wear a long blue cloak with a red collar.

Changing of the guard